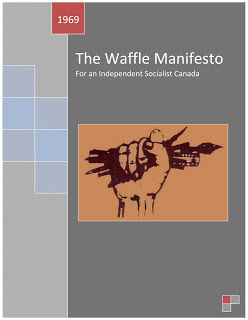 Beyond that, whatever the movement's failings may have been, the Waffle also represented the attempt of a new generation of socialist activists to have influence and a voice within the country's established socialist party. It expressed and advocated the idea that members of a socialist party should be allowed to, and have a right as members to, question the party leadership, the leadership's ideas and to dissent vocally and democratically.

After Laxer, a relatively unknown 29-year-old university lecturer won a very surprising 37 per cent of the vote for the leadership of the party against its standard-bearer establishment candidate, David Lewis, the reality that much of the membership of the party was seeking new directions and strategies, became a threat that the party's first family felt it could not ignore.

In Orillia, Ontario on June 24, 1972, the ONDP's Provincial Council at the behest of ONDP leader Stephen Lewis, David Lewis' son, voted to order the Waffle to either disband or to leave the NDP.

Recently, in an interview on CPAC (the full part about the Waffle starts at 14:00 approximately, while the Rebick-Lewis part begins at 17:00) during a special dedicated to the history of the NDP, Stephen Lewis, after a segment showing Judy Rebick stating that the expulsion of the Waffle had been a serious and hugely damaging error on the part of the party leadership, essentially takes credit for the entire future "success" of the NDP, both in Ontario and everywhere in Canada, by having pushed the Waffle out.

He claims that what Rebick says is not only "palpably wrong" but that "history has proven her wrong" and lists a, to be blunt, rather short number of "victories" after June 1972, culminating with Jack Layton and the federal NDP becoming the official opposition 39 years later as if the two events are directly related, an obviously specious and ridiculous claim.

With all due respect to Lewis' attempt to preserve his legacy within Canadian social democracy, what he leaves out, rather notably, are the NDP's many defeats over those 40 years, as well as the broader defeat of the social democratic idea itself during the same time.

He fails to note that after the relative federal NDP success of 1972 came the defeat of 1974 that saw his own father lose his seat in parliament. While implying the expulsion of the Waffle resulted in the ONDP becoming opposition in 1975, he does not mention that they fell back into third place in 1977 and he himself resigned as leader. While raising the Rae victory of 1990 and the victory of the NDP in B.C. in the same year, he, needless to say, does not bring up how those years in government turned out, nor how any of the limited reforms these governments introduced were later dismantled by reactionary successor governments.

He entirely ignores the wilderness years of the 1990s, the reduction of the party to single digit popular support at that time, the loss, in 1993, of every single federal seat in Ontario, etc.

More significantly, of course, is that Lewis does not note at all that over that same period Canada has witnessed the dramatic rise of neo-liberalism as our country's governing ideology and that in every single meaningful respect Canadian unions, workers and the poor have undergone a relentless retreat in their political power and rights with the dismantling of the post-war "compromise." Economic inequality is far higher then in 1972, corporations are less regulated and have more power than they did in 1972, free trade and continentalist economic integration succeeded, we now live under the most right-wing federal government in modern Canadian history, and, from a left-wing perspective, the "programs" that the NDP runs on, provincially or federally, such as they are, reflect this retreat fully.

If Rebick was "palpably wrong" as proven by "history," it is difficult to see how. To say that the legacy of the Waffle's expulsion might be more nuanced than the Long March to victory that Stephen Lewis would have us believe would be an understatement.

The purge of 1972 pushed out intellectuals, much of the party's youth (in fact, shockingly and tellingly, its youth wing was not allowed to reform until 1988), many of its radical feminists and began the final shift of the party away from its origins as a party that sought to be the expression of an ideological idea and popular socialist movement towards a party that has become fixated on its own power and whose ideas are dictated by short-term political goals and, at present, preventing the reemergence of the Liberal Party as a contender for government. While the Liberal Party richly deserves its developing status as a marginalized and irrelevant boutique party of the centrist elements of the middle classes, this last goal would be more laudable if there was any meaningful programmatic and ideological differences between the two parties that were not now matters of history.

Ultimately political movements and their electoral wings seek to change society and the civil discourse. Political parties seek to win elections. These are not at all the same goal.

The NDP, to a large extent, has become driven by pollsters and places great emphasis on soaring but empty rhetoric meant to inspire without the need to really say much. The Obamaesque qualities of Layton's entire 2011 federal campaign were centred around tightly managed sound bites seeking to hammer home two or three points that have been chosen from a minuscule election "platform" for a variety of demographic reasons.

Shortly after the "victory"of the NDP in becoming the official opposition, the then National Director, Brad Lavigne, went on CBC to state that:

"We've been absolutely fixated on making sure that we run a first-rate campaign with a strong message, and we knew that message out there was, 'Ottawa is broken, it's time to fix it. It's time that it works for families to get things done.'

We attached that to the right demographics in the right ridings across the country, and the great thing about tonight is that the growth is everywhere. It's in Atlantic Canada. New seats in Newfoundland and Nova Scotia. Throughout Ontario and the West."

The problem with both this sentiment, and the notion of Lewis that his and the NDP's actions in 1972 are somehow farcically justified by the winning of opposition status, is that, sorry to point out, the Conservatives actually won the election in 2011.

While the NDP may be ahead in the polls now, and while they may yet win government, the damage that will be done by the Tories over the coming majority mandate is becoming very clear, and, given the political history of the last 40 years, and given the propensity of the centrist "left" to seek to adopt the mantles of moderation and of eschewing radicalism, there is little hope that much of this damage will be undone in any serious way without the re-emergence of forces either within or outside of the NDP.

It would seem, using Stephen Lewis' bizarre logic, that the end result of June 24, 1972, given that Layton actually lost the election, was Stephen Harper. There is no refracted glory to be had here.

In a less fanciful sense, the real legacy of the expulsion, and one that is demonstrably clear, was the creation of an NDP culture that deeply distrusts it own membership and that has taken power within the party from that membership and given it over to a handful of people that consists of the leader and his or her entourage of bureaucrats, and sycophantic "yes" people.

In the wake of the purge, as already noted, the party disbanded its youth wing and disbanded the entire New Brunswick NDP. It pushed out a generation of activists and created a party environment that was inimical to many social activists. This remains true.

In the ONDP right now we have a party that violated its own constitution to ensure that a convention would not occur prior to the last election, that declared elections within its own youth wing that it did not like null and void and promptly, on entirely specious grounds, invalidated them, and that even went so far as to deny to the Toronto Starthat policies passed by the ONDP's membership existed at all! (My favourite part of the article is the hilariously Orwellian claim by the ONDP representative that some membership resolutions "are out of date the moment they're passed")

Federally, the last campaign was notable for its tremendously centralized messaging. The platform contained nothing of substantive value and this can be quickly determined by reading it. It bears no resemblance at all to either the ideas of the membership as a whole or even to the ideas of the NDP that the Lewis' led. Uniformity of opinion within the caucus is total, in an outward way, and we have an NDP Opposition led by an MP from Quebec that has refused to take a stand on the greatest upheaval to hit his province in a generation. Nor has he allowed his large and neophyte Quebec caucus, some of whom were students prior to the "Orange Crush," to do so.

On the whole it would seem that the party within the party was and is the leadership itself.

*In the spirit of full disclosure, James Laxer & Krista Maeots are the parents of the author of this article!
Posted by Next Year Country