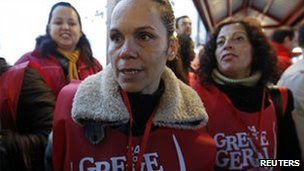 Lisbon - Fatima, 82, barely has enough to eat herself, yet she has come to distribute bread buns to pickets in front of a Lisbon post office to express her support for Wednesday's general strike in Portugal.
'I fully back the strike, because we are hungry,' she fumes.

'Two of my three sons have no job,' the petite woman complains. 'When did we last see such a situation in Portugal?'

Anger over tightening economic conditions and the perception of a social injustice boosted support for the strike, the biggest in Portugal since 1988.

'This is without doubt the worst crisis' since the Carnation Revolution ended a four-decade, right-wing dictatorship in 1974, says Eugenio Fonseca, president of the Portuguese branch of the Catholic organization Caritas which comes to the aid of the poor.

The number of people helped by Caritas soared by 30 per cent to more than 60,000 this year - and the organization says it does not have enough resources to attend to all those in need.

About 600,000 Portuguese aged over 65 years are undernourished or even suffer from outright hunger, according to a recent study by the organization NutriAction.

The social organization Banco Alimentar, which feeds about 240,000 people daily, says 27 per cent of the 10-million-strong population goes without eating at least one day per month.

'But the poor do not allow themselves to be manipulated,' she told the weekly Expresso. 'If the state tries to do that, it will get dangerous here,' she warned.

There is not much hope of the situation improving soon, says Eva Gaspar, editor-in-chief of the economic newspaper Jornal de Negocios.

'The social situation is getting worse,' she told the German Press Agency dpa. 'We have a record unemployment (of over 10 per cent). But an even worse aspect is, that people remain unemployed for longer and longer periods.'

'And only about half of the jobless get financial support from the state,' Gaspar explained.

One of the main reasons for the growth of poverty is an unfair taxation system, Caritas' Fonseca believes.

The strike was protesting an austerity budget aimed at restoring the confidence of financial markets amid concern that Portugal might need an international bailout similar to those requested by Greece and Ireland.

The austerity budget, which is expected to get the definitive seal of approval from parliament on Friday, slashes public sector salaries by 5 per cent, freezes pensions, raises value added and income tax, and cuts social spending.

Socrates' economic policies 'demand too many sacrifices from workers, while leaving out many (wealthy citizens) who could pay much more,' said Joao Proenca, leader of the trade union confederation UGT.

'I will only have soup for supper,' Fatima grumbled. 'Socrates should not sleep peacefully tonight.'
Posted by Next Year Country