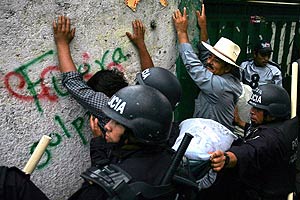 On August 14, one campesino and five Dinant security guards were killed in the Panama farm. On August 15, five more people were massacred in a pick-up truck that left the Honduran National Agrarian Institute headquarters, where hundreds of campesino farmers currently live in temporary huts, after being illegally evicted from their homes and lands. The August 15th shooting occurred in front of a palm plantation controlled by the Dinant Corporation, and security guards had been seen at the location moments before the massacre.

These incidents are part of an on-going and growing wave of violence and State repression in the region stemming from historic land conflicts. The violence and repression appear to be related to militarization, the demand for palm oil and to drug trafficking activities that have increased markedly in the region since the June 28, 2009 military coup that ousted the elected government of President Zelaya - a coup that was backed directly and indirectly by the USA and Canada.

Since the coup, campesino organizations attribute at least 45 killings in the Aguan region alone to private security forces working for the wealthy producers of African palm oil, who often act jointly with State police and military forces.

After the coup, advances that had been made toward the resolution of historic and underlying campesino land claims came to a crashing halt. Campesinos in the Lower Aguan region had spent over 15 years attempting to have their land rights recognized through legal processes and political dialog, all of which were ended with the coup, pitting campesinos against an apparent alliance between military, police, mercenaries, large scale African palm oil planters and drug traffickers.

This most recent surge in violence and State violence occurred days after Stephen Harper, the Prime Minister of Canada, signed a "free" trade agreement with Honduras, and as Lisa Kubiske is poised to take office as the new US Ambassador to Honduras. Much of Kubiske's career has focused on the promotion of biofuel investment (that African palm oil is used for) and the passing of so-called "free" trade agreements.

Over two days, Sunday August 14 and Monday August 15, eleven people were killed in two different incidents in the Lower Aguan region of Honduras. In response between 600 and 1,000 troops are being deployed to the region; violence and State repression in that region have spiked since the June 2009 military coup and notably since the region was militarily occupied in March of 2010.

Since late 2009, a group of 100s of private security guards, that acts as a local paramilitary force, has been established and works for a series of African palm oil plantations (producing for the diesel bio-fuel trade), though this force also has carried out acts of repression against local campesino communities on behalf of drug traffickers. 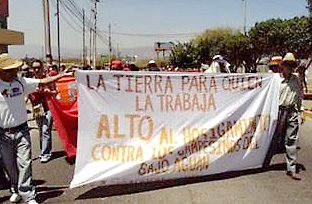 Early in the morning, Sunday August 14, campesinos from the Movimiento Campesino Colonia Nueva Vida de Rigores (MCCNVR) occupied the Finca Panama, ten minutes from the community of Rigores in Trujillo, Colon. This peaceful action was part of their on-going efforts to claim lands they feel they have legal, legitimate claim to.

Campesinos believe the soldiers confused the security guards and the campesinos, as some security guards were dressed as civilians and, also, the security guard uniform is difficult to distinguish from civilian clothing. Local informants report that all of the victims were killed by shots fired from military issued RPG-15 rifles.

"BLAME THE VICTIMS" - Soldiers were transported in a Ford F350. A number of Ford F350s were reportedly donated to Honduran Military by the US Military in late 2010. Honduran press reports, unquestioningly citing a Dinant Corporation press release, described this incident as an armed attack by campesinos against security guards, completely distorting the events.

The property and buildings of the National Agrarian Institute (INA), in Sinaloa, Tocoa, are closely identified with the Honduran campesino movement, frequently hosting educational events of campesino organizations. Currently a tract of land behind the INA is being converted into a town for hundreds of families who have been illegally and forcibly displaced from the cooperatives of La Aurora and La Confianza after Honduras' largest land-owner, Miguel Facusse, agreed to terms of sale for these two farms in an agreement signed June 15, 2011 which specified the terms of sale for 7 out of 14 farms Facusse had agreed to sell to campesinos in April of 2010.

On August 15 at approximately 2pm, an unmarked truck belonging to a Pepsi distributer pulled out of the INA installations, where employees were distributing publicity materials. Local informants report that a blue pick-up opened fire on the Pepsi truck, killing all five occupants. The shooting took place close to a private security guard post, on the road that separates INA headquarters from the San Isidro farm, a palm plantation controlled by the Dinant corporation. Sources who were in INA installations at the time report that palm plantation security guards had been seen in the area shortly before the massacre.

The majority of campesinos assassinated in the Aguan have been killed by passing pick up trucks, as campesinos walked, rode bicycles or drove automobiles. In many cases, witness report recognizing the occupants of the assault vehicles to be palm plantation security guards.

The Finca Panama and the Finca San Isidro are just two of many large farms in the possession of the Dinant Corporation, the largest African palm oil corporation in Honduras, owned by Miguel Facusse - one of the wealthiest men in the country, and known to be one of the intellectual and material authors of the June 2009 military coup.

Within a few years, out of the 53 cooperatives that existed in the Lower Aguan at the time of the land 'modernization' laws, 35 had been allegedly sold, principally to three wealthy, powerful African palm oil businessmen - Rene Morales, Reynaldo Canales and Miguel Facusse. These "sales" generally occurred through a combination of fraud, corruption, violence and intimidation. Many of the campesino cooperatives quickly began legally challenging the sales, legal and political struggles which continue to this day but are paralyzed within the extremely corrupt Honduran justice system.

The Finca Panama borders lands of the Movimiento Campesino de Rigores (MCR), lands to which another powerful landholder Eric Rivera claims to hold rights. Campesinos recount that in the year 2000, Rivera's father had coordinated with campesinos at the time they settled on the farm, planning to use the agrarian reform program's mechanism to provide a loan to farmers to buy the land from Rivera. Years passed without accessing the needed loan for the land purchase.

Since 2005, eviction orders had been requested by Eric Rivera but all had been suspended by courts. Rivera, widely described to be a drug trafficker in the area, is reported to surround himself with a personal security contingent of approximately 20 heavily armed guards at all times. In addition, Dinant Corporation security forces have been an active force in intimidating and attacking the MCR.

On May 15, 2011 Francisco Pascual Lopez, a farmer from the MCR was tending his cattle when, according to an eye witness, security guards working for Miguel Facusse shot Pascual in his land, and then dragged him into the Finca Panama. The witness ran for help, and even though community members found a trail of blood leading onto the Finca Panama, police refused to enter the Finca Panama to locate the wounded man.

On June 24, 2011, the community of Rigores was violently evicted and over 100 homes burned by State police and private security forces that also work for African palm plantations. On July 1, the same forces, again with no eviction order, again attacked the Rigores community, burning homes that families were attempting to rebuild - however, that day the presence of an international observation delegation deterred further violence.

Again, on August 2, police and private security forces perpetrated an armed attack on the Rigores community wounding a man from a neighboring community, Ariel Lara.

INCREASED MILITARIZATION IN THE REGION ENDANGERS THE LIVES OF CAMPESINOS

In response to the Finca Panama incidents on August 14 and 15, 2011, Minister of Security Oscar Alvarez announced the re-militarization of the Aguan in response to the killings on Finca Panama, sending a further 600 to 1,000 troops from the 4th Infantry Battalion in La Ceiba and the 14th Battalion, among others. These troops will add to an already very large armed presence in the area.

Witnesses report that hundreds of private security forces are being trained by the Honduran military in the 15th Battalion in Rio Claro, Trujillo, Colon, and inside the plantations controlled by African palm oil magnates Rene Morales and Reynaldo Morales. Witnesses also report that police, particularly from the station in Tocoa, Colon, and military particularly from the Rio Claro base as well as the 4th Batallion in La Ceiba, participate in joint operations with the private security forces.

Operations undertaken jointly (State forces and private para-military groups) range from roadside checkpoints to armed attacks on communities, drive by shootings and kidnappings. Military, police and private security forces are reported to exchange uniforms depending on the context, to mobilize jointly both in police patrol cars and automobiles that belong to private security companies employed by the African palm planters.

There are also widespread yet unconfirmed reports that Colombian paramilitary forces and US Army Rangers train the African palm companies' private security forces both in the 15th Battalion and on palm plantations. On September 12, 2009 the Colombian newspaper El Tiempo reported that Honduran palm planters were recruiting former AUC paramilitaries, and in October 2009 the UN Working Group on the Use of Mercenaries reported that 40 Colombian paramilitaries had been recruited by Honduran property owners for security activities.

The relationship between the military, police and the private security guards clearly demonstrates that the security guards are acting as paramilitary forces, a situation extremely complex in the Aguan as drug trafficking activities have also grown tremendously since the June 28, 2009 military coup.

Multiple newspaper articles make reference to drug planes and boats being located on palm plantations; several on plantations controlled by Miguel Facusse, such as the Farallones farm in Limon, Colon.

The presence of weapons in the region has also grown tremendously; as illegal arms shipments enter the region and military issue weapons are placed in the hands of paramilitary or organized crime networks.

Campesino farmers, in need of a means of survival and of reclaiming possession of lands illegally taken from them, are forced into conflict not only with police, military and paramilitary forces, but also organized crime networks who reportedly maintain close collaboration with the police, military, and private security forces.

Honduran campesinos are defenseless, faced with corrupted political, justice and security systems at the service of large landholders, be they drug traffickers, African palm planters or both.
Posted by Next Year Country