Washington cannot confer legitimacy on this flawed election that does nothing for Haitians living under tarps, menaced by cholera 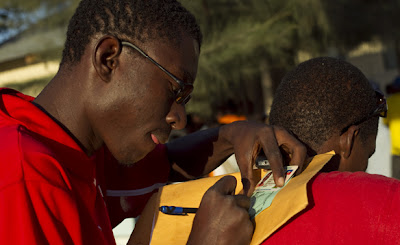 UN soldiers from Sri Lanka at the Haitian election tabulation centre in Port-au-Prince. The elections ended in confusion on Sunday, as 12 of the 18 presidential candidates denounced ‘massive fraud’, although international observers insist the eventual result will stand. Photograph: Eduardo Munoz/ReutersThe election in Haiti shows, once again, how low Washington’s standards are for democracy in countries that they want to control politically. And there is no doubt who is in charge there. There is a government, to be sure, but since the elected government in 2004 was overthrown, and even more since the earthquake, it is the “international community” that calls the shots – Hillary Clinton’s code for the US state department.

The election was a farce to begin with, once the non-independent CEP (Provisional Electoral Council) decided to exclude the country’s largest political party from participating, along with other parties: Fanmi Lavalas is the party of Haiti’s most popular political leader, Jean-Bertrand Aristide. It has won every election that it has contested. Aristide himself remains in exile – unable to return since the US-sponsored overthrow of his government in 2004. 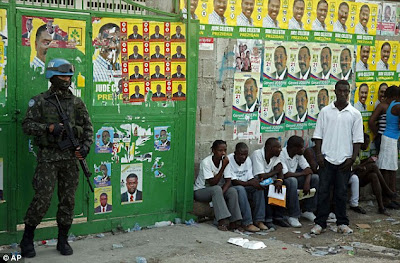 Imagine holding an election in the United States with both the Democratic and Republican parties prohibited from participating. If we look at other troubled elections in the world – Iran in 2009, or Afghanistan more recently – Haiti’s is even less legitimate. It is perhaps most comparable to the recent election in Burma.

But the United States government paid for this election, and was determined to go ahead with it and get the usual suspects to endorse it. The pleadings of 45 Democratic members of Congress, who sent a letter to Hillary Clinton on 7 October asking for a real election with all political parties included, were ignored. So, too, were the objections of President Obama’s Republican foreign policy mentor, Senator Richard Lugar. 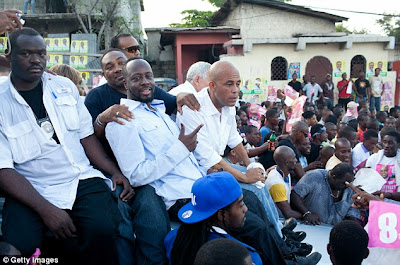 The conduct of the elections turned out to be even worse than expected. There were widespread reports of people being unable to vote because they were not on the voter lists, incidents of ballot-stuffing, and other irregularities.

Despite all of this, the Organisation of American States issued its statement on Monday: “The Joint Mission does not believe that these irregularities, serious as they were, necessarily invalidated the process.” No wonder the leaders of Latin America and the Caribbean met last February and decided to create a new regional organisation without the United States and Canada.

Haiti, of course, has bigger problems than a bogus election. And, in fact, that was a complaint heard on the ground – why was money being wasted on an electoral circus when people do not have access to drinking water, and the country is in the middle of a cholera epidemic? The latter crisis seems to have been pushed off the world’s radar screen by the election, despite the fact that the United Nations has been able to raise only around 10% of the $164m they need to treat an epidemic that is estimated to grow to 400,000 cases of cholera in the next year. 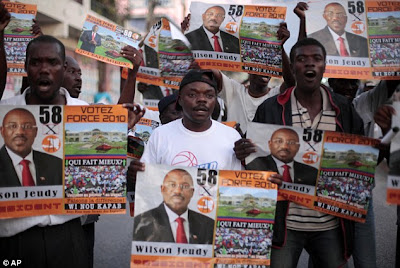 And then there is the unbelievable failure of the reconstruction itself. Nearly a year after the earthquake, less than 2% of the rubble has been cleared, and less than 10% of the 1.5m people made homeless by the earthquake have shelter. Most of the rest are living under tarps, with the earth beneath them turning to water and mud when it rains. The “international community” could not even get them tents.

Yet the bogus election does matter because, if allowed to stand, it will foist an illegitimate government on Haiti. For most of its existence, and until quite recently, Haiti was ruled by illegitimate governments that relied heavily on violence to maintain power. Aristide was the first democratically elected president, in 1990. He was overthrown seven months later, but eventually re-elected in 2004. Because his government was legitimate and did not have to rely on violence, he abolished the army – which was the main instrument of political violence. Washington never forgave him for this, and organised an international cutoff of aid to the country, while pouring tens of millions of dollars into the opposition, thus toppling the government.

In April of 2009, an election that also excluded the largest political party resulted in a boycott of about 90% of the electorate. Participation in this latest election appears to have been higher (although lower than the previous presidential election), but it will not be seen as legitimate. This has already increased social unrest. There is no longer a Haitian army, but there is a badly-trained national police force and a UN military force (MINUSTAH), which is widely seen as an occupying army and is notorious for its violence and human rights abuses. Its standing has fallen even further as it appears to be the source of the cholera epidemic. 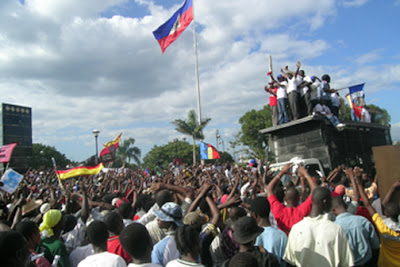 Haiti needs a government that can contribute to the reconstruction of the country, its public health and the institutions necessary to promote economic development and employment. An illegitimate government won’t meet any of these needs, and only raises the risk of increasing political violence.