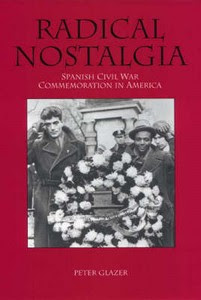 Nostalgia can serve as a vital tool in the emotional reconstitution and preservation of suppressed histories, rather than sentimentally privileging the past at the expense of present concerns and limiting a culture's progressive potential. Between 1936 and 1938, responding to a military coup in Spain led by Francisco Franco with the support of both Hitler and Mussolini, over 2700 US anti-fascists joined 30,000 volunteers from around the world to form the International Brigade. They came together to defend the democratically elected Spanish government against this early manifestation of the fascist Axis. After three bloody years, Franco's rebellion succeeded, and his dictatorship lasted until his death in 1975.

From the moment the first American volunteers returned home, and to this day, they have been holding commemorative events recalling the struggle. For nearly seventy years, the Veterans of the Abraham Lincoln Brigade have cited and re-cited their activist past in theatrically eclectic, highly emotional commemorative performances, a site for both nostalgia and progressive politics. Literary recitations, scripted dramatic pieces, songs, films, photographs, and celebrity appearances have been juxtaposed with speeches, fundraising, and a rigorous attention to pressing political and social concerns of the day. The history and content of these events is detailed and analyzed here based on a combination of archival and ethnographic evidence. The exemplary role of songs from the war, as both nostalgic triggers and historical artifacts, is also examined.

Commemorations of the Spanish Civil War have provided necessary anchors for a period in U.S. history when views now thought extreme were an accepted part of mass political discourse. Through this rich, inter-generational performance practice, a marginalized, vernacular political minority has deployed radical nostalgia as a necessary corrective to an official culture disinterested in America's leftist past, and threatened by its implications.

Peter Glazer is associate professor in the Department of Theater, Dance, and Performance Studies at the University of California, Berkeley.


Reviews
Nostalgia is too often dismissed as a conservative retreat into the past. Peter Glazer's passionate account of the memory of Americans who fought in the Spanish Civil War and the manner in which they performed their past, however, makes a brilliant case not only for the progressive potential of nostalgia but for the power of the vision that animated the old-left in the first place. --John Bodnar, Chancellor's Professor and Chair, Department of History, Indiana University

Radical Nostalgia asks and answers important questions about the meaning of memory and the politics of history. Peter Glazer's warm, empathetic, and insightful study of ceremonies commemorating the Spanish Civil War in the U.S. helps us understand the power of the past in our lives. --George Lipsitz, author of American Studies in a Moment of Danger, professor of American studies at the University of California, Santa Cruz.

Glazer begins this story of commemoration with the veterans themselves, and their great longing for resolution that came with loss in Spain, their search for purpose in the present, their struggle to maintian community in the face of political repression . . . Glazer reveals a nostalgia that is active, creative, often tormented, but rarely frozen in a past. . . . Commemoration serves as an umbrella covering a variety of people, giving them a shelter from an often hostile world and invigorating them to step foward. --THE VOLUNTEER, December 2005

Peter Glazer reframes, and in some ways reclaims, the concept of nostalgia as a way of reconnecting with the progressive politics of the past. . . . Glazer's participant-observer perspective and the clear frankness with which he positions himself within his subject prove most compelling. --MODERN DRAMA, Fall 2008 [E. J. Westlake]
Posted by Next Year Country