Facts on the Recent Artillery Duel: 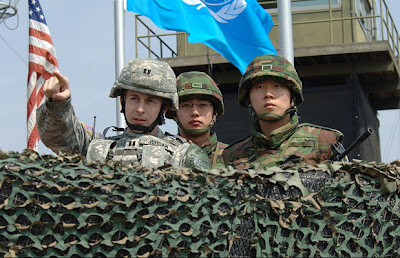 • On Tuesday, November 23rd, 70,000 South Korean and American military troops engaged in an annual military drill, called “Hoguk [Defend the State],” involving 50 warships, 90 helicopters, 500 warplanes, and 600 tanks mobilized for war simulation exercises scheduled for a period of 9 days, until Nov. 30th.
• The Democratic People’s Republic of Korea (DPRK) criticized the mobilization, stating that they were provocative, and demanded that South Korea halt the drill.
• South Korean artillery units fired toward DPRK from a battery close to the DPRK coast, within a disputed maritime region called the Northern Limit Line (NLL). The disputed border on the west coast between North and South Korea was drawn unilaterally by the U.S. Navy in 1953; it was never recognized by the North.
• After four hours, the DPRK replied with 100 artillery shells from a position north of Yeonpyeong Island; South Korea then fired back 80 artillery shells.
• Two South Korean marines and two civilians were killed and at least 16 others injured on Yeonpyeong Island, a site with military bases as well as a fishing community of 1,300 residents. DPRK casualty and damages are unknown.

U.S. Involvement and Escalation of Tensions
• Obama has responded by sending the nuclear-powered aircraft carrier USS George Washington (carrying 75 warplanes and a crew of over 6000) and other warships to conduct additional joint war-games with the South Korean military in the vicinity of the NLL, to begin Sunday, November 28. • There has not been a formal end to the Korean War. In 1953, only an armistice was put into place.
• Since 1953, there have been military clashes between South Korea and the DPRK in the disputed area of the NLL.
• In 1999, a DPRK ship sank in a clash with the South Korean Navy, killing 3 sailors and wounding roughly 70.
• In 2009, the South Korean Navy fired at a DPRK vessel that crossed the demarcation line and killed several sailors.
• In March 2010, the Cheonan, a South Korean navy corvette, sank, killing 49 sailors.
• 10 million Korean families are separated due to the continued state of war and division in Korea.

These tragic incidents are a result of continued division and the unending state of war on the Korean  peninsula, and underscore the frailty of the Armistice Agreement – the cease-fire signed by the United States(representing the United Nations Command, which included the Republic of Korea), China, and the DPRK
in 1953.

Without formalized relations and engagement, the potential for increased tension and conflict will always remain very high. The U.S. should take active steps to finally end the Korean War with a peace agreement and use its influence in South Korea to bring both sides to the table. 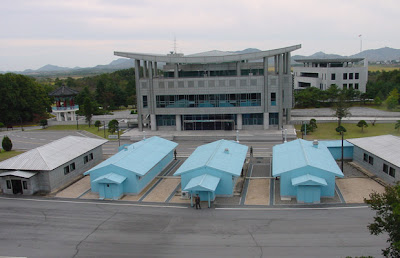 Tensions were already running high on the peninsula prior to the recent tragic events, as the DPRK recently revealed a new uranium enrichment facility and a light-water reactor to a U.S. delegation.
• 1993 – In response to increasingly severe sanctions imposed by the United States and its aggressive military posture,
the DPRK announced its intention to withdraw from the Non-Proliferation treaty (NPT). The following year, it kicked International Atomic Energy Agency (IAEA) agents out of the country and removed spent fuel rods from its Yongbyon reactor.
o In response, former U.S. President Clinton threatened a preemptive strike against the Yongbyon facility.
Senator John McCain called for “air or cruise missile strikes” on the reprocessing facility.
o Referring to the possibility of U.S. nuclear strikes against North Korea, scholar Meredith Woo-Cumings
notes, “the Clinton administration came within a hair’s-breadth of a war in Korea without so much as
consulting with its South Korean ally on an action that would have had devastating consequences for the
nearly seventy million people on both sides of the DMZ.”
• 1994 – Jimmy Carter visited Pyongyang, and transformed a confrontation at the brink of war into a new opportunity for negotiations. This resulted in the 1994 Agreed Framework, in which the DPRK agreed to stop its nuclear program in exchange for energy alternatives and a non-aggression pact with the United States. This stopped DPRK’s fuel-cell reprocessing and restored IAEA inspection for eight years.
• 2001 – George W. Bush reversed this course and announced that he would not negotiate with any state that he deemed to be “terrorist.” In 2002, Bush declared the DPRK part of an “axis of evil” and a potential nuclear target, and halted heavy oil shipments to the DPRK. The U.S. and South Korean militaries conducted the largest joint military exercise to date. 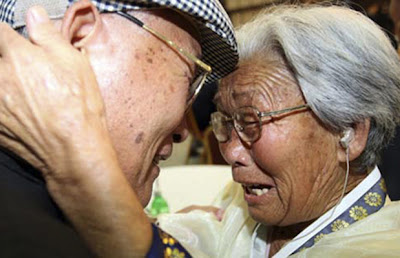 • 2003 – The DPRK test-fired a scud missile into the East Sea and withdrew from the NPT. Alarmed by DPRK’s nuclear program, the United States proposed the Six Party talks, a series of multilateral negotiations involving the DPRK, United States, China, South Korea, Japan, and Russia.
• 2005 – After three years of negotiations, the talks produced the 9.19 Joint agreement, in which the DPRK agreed to stop its nuclear program in exchange for U.S. assurance that it would not attack the DPRK and commit to normalization of relations.
• Unfortunately, no substantive progress has been made in the Six Party talks since 2005; and the DPRK has accused Washington and Seoul of reneging on earlier agreements, including a promise to supply energy in return for shutting down its nuclear reactor at Yongbyon.
• 2010 – In November, DPRK officials permitted access by U.S. nuclear experts to an advanced facility for purifying uranium. DPRK officials made it clear that the centrifuges would be "on the table" for discussions with the United States.
• In their recent meeting with DPRK officials, Leon Sigal, Director of the Northeast Asia Cooperative Security Project at the Social Science Research Council in New York, and former U.S. officials Joel Wit and Morton Abramowitz were told that Pyongyang is prepared to ship out all of its nuclear fuel rods, the key ingredient for producing weaponsgrade plutonium, to a third country in exchange for a U.S. commitment to pledge that it has “no hostile intent” toward the DPRK. Such a pact could set the stage for reopening the Six Party talks. 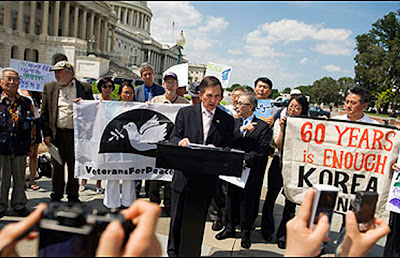 • Direct negotiations, as a first step toward a peace treaty or agreement, are the only way to end Pyongyang’s nuclear weapons program and eventually move toward a peace agreement to formally end the conflict. Sanctions apparently have not worked to retard DPRK’s nuclear development. Neither has Obama's policy of "strategic patience."
• The DPRK insists on direct talks with the United States. Leaders in Pyongyang consider South Korea's armed forces to be controlled from Washington and point out that South Korea was not party to the 1953 cease-fire. Since the Clinton administration, the United States has negotiated through the six-party approach, largely avoiding substantive bilateral discussions. The Obama administration has maintained that no talks with the DPRK government of Kim Jong Il are possible until the regime abandons its nuclear weapons program. 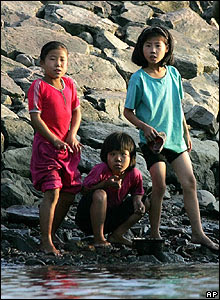 • Washington’s role on the Korean peninsula is critical because the United States maintains 28,000 ground troops in South Korea and holds operational command over Korean forces in times of war—distinguishing South Korea as the only country in the world in such a situation.
• “Without direct negotiations, North Korea is likely to keep enriching uranium, restart its reactor at Yongbyon, conduct another nuclear test as it did in 2006, and test more missiles.” – Leon Sigal of the Social Science Research Council.
• “The only hope appears to be engagement. The United States and its partners should respond to the latest nuclear developments so as to encourage Pyongyang to finally pursue nuclear electricity in lieu of the bomb. That will require addressing North Korea’s underlying insecurity.” – Siegfried Hecker, former director of the Los Alamos National Laboratory who recently toured the DPRK and saw its facility for purifying uranium
• “Being realistic about the North makes no moral judgment about its system or policies, nor does it cede anything in terms of our values or goals. U.S. policymakers need to go back to square one. A realistic place to start fresh may be quite simple: accepting the existence of North Korea as it is, a sovereign state with its own interests.” – Robert Carlin and John Lewis, Stanford professors who recently toured the DPRK and saw its facility for purifying uranium
• “Pyongyang has sent a consistent message that during direct talks with the United States, it is ready to conclude an agreement to end its nuclear programs, put them all under IAEA inspection and conclude a permanent peace treaty to replace the ‘temporary’ cease-fire of 1953.” – Former U.S. President Jimmy Carter
• "... One item should be at the top of the agenda, however, in order to remove all unnecessary obstacles to progress, that is the establishment of a peace treaty to replace the truce that has been in place since 1953. 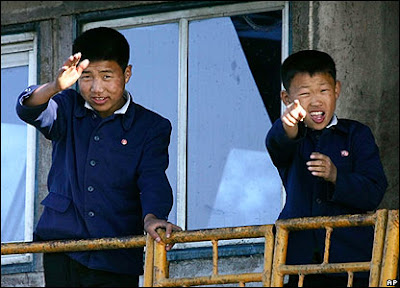 One of the things that have bedeviled all talks until now is the unresolved status of the Korean War. A peace treaty would provide a baseline for relationships, eliminating the question of the other’s legitimacy and its right to exist.” – James Laney, former U.S. Ambassador to South Korea

As tensions continue to mount, it is critical that we urge President Obama to stop the joint U.S.-South Korean war maneuvers and not send additional U.S. warships and planes, including the U.S. aircraft carrier George Washington.

Instead, the United States should begin negotiations immediately and sign a Peace Agreement to end the state of war that has existed for sixty years since the Korean War.
Posted by Next Year Country