﻿
﻿ "In Portugal, we, too, are in a phase of mass mobilization". For Manuel Carvalho da Silva, the country’s main union leader, the call for a general strike against the austerity policy is the beginning of a broader process of struggle.

HUMA: How is this mobilization going, a few hours after the start of the general strike?

CARVALHO DA SILVA: Every year has been marked by acts of resistance to the policy of austerity. I have been criss-crossing the country for several weeks, meeting thousands of people, workers, young and old, retired, and I felt widespread awareness of the strike called across the country. Many unions, as well as the CGTP and the UGT, have announced their participation, particularly in banking, the press, but also in the oil sector, transportation and the motor industry. The mobilization is very strong, not only in the public sector, as we saw with the demonstration on November 6 which was attended by over 100,000 people in Lisbon, but also in the private sector, despite pressure from employers and despite the fact that 30% of employees are in a precarious situation. These are mostly young people working at the minimum wage.

For this reason, this strike is a big challenge for the younger generation, a chance to react to the injustices they face. We are in a situation that unfortunately can be described as historic: for the first time since the Second World War, young people have no prospects, living conditions are worse than those of their parents. It is a problem that concerns all of Europe. In addition, under the pretext of poor economic conditions, governments are calling into question fundamental rights, education, health and labour law. This undermines democracy.

HUMA: What do you expect from the government as Parliament on Friday will definitively adopt the budget, including the unprecedented severity that provoked the strike? 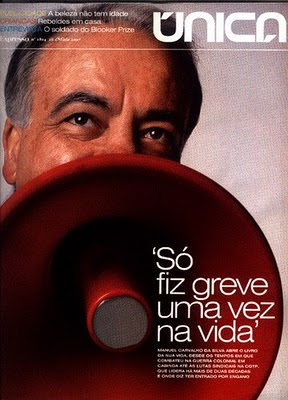 CARVALHO DA SILVA: We call on the Socialist government of Jose Socrates to reject the blackmailing by the international moneylenders and their recipes for cuts. We know that for the moment, positive responses are very difficult. We are in a very significant political crisis. The Socialist government and their right-wing opposition have agreed to insist that they are not responsible for the sacrifices demanded from the Portuguese people. We do not expect great results immediately. The day after the strike, we request the resumption of dialogue with the government and we will present our demands.

Today, everything is blocked, even collective bargaining in companies and at the Economic and Social Council. For example, the expected increase in the minimum wage from 1 January, which was from €475 to €500, was suspended. The government wants to reduce, within three years, the deficit of the state by oppressing workers and exempting large businesses from paying their taxes. With a deficit of €500 million, if only two major companies, Porto CEL (paper industry) and APT (telephone and communications), paid the €300 million in taxes they owe to the country, things would change. The obsession with tackling the deficit and accelerating privatization will not boost growth in our country — quite the contrary.

HUMA: What could change after the strike?

CARVALHO DA SILVA: This strike has meaning. It aims to fight apathy, to bring about understanding that organized resistance can lead to alternatives. It is not the EU or the IMF which will give us the solution. This is the responsibility of the Portuguese people. It is our job to build an alternative development project that boosts our economy, our production system, upgrades jobs, restores dignity to workers and youth.

This strike is a struggle for future generations and opens up a process. We must not only stop the current offensive, but also must plan ahead, create conditions to push our government to change policy. It will be a long haul and I think this will be true not only for Portugal but also for all of Europe. The conditions and social dynamics exist; we are in a phase of mass mobilization. It’s our job to find within it the means by which it can gain momentum.

Interview by Dominique Bari
Posted by Next Year Country