Book Review: 'The Hidden History of the Korean War' by I.F. Stone 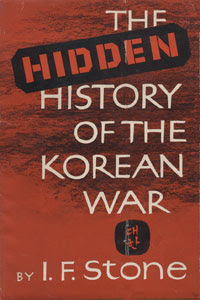 Publishing such a book in the U.S. during the time of McCarthyism, while the war was still continuing was an act of journalistic courage. Forty years later, declassified U.S., Soviet and People's Republic of China documents both confirmed some and corrected some of Stone's story.

Until his death in 1989, Stone was an experienced and respected, independent, left-wing journalist and iconoclast. This book-length feat of journalism, with over 600 citations for his quotes and materials, is a testament to Stone's search for a way to strengthen his readers to think for themselves, rather than be overwhelmed by official stories and war propaganda.

The standard telling was that the Korean War was an unprovoked aggression by the North Koreans beginning on June 25, 1950, undertaken at the behest of the Soviet Union to extend the Soviet sphere of influence to the whole of Korea, completely surprising the South Koreans, the U.S., and the U.N.

But was it a surprise? Could an attack by 70,000 men using at least 70 tanks launched simultaneously at four different points have been a surprise?

Stone gathers contemporary reports from South Korean, U.S. and U.N. sources documenting what was known before June 25. The head of the U.S. CIA, Rear Admiral Roscoe H. Hillenloetter, is reported to have said on the record, "that American intelligence was aware that 'conditions existed in Korea that could have meant an invasion this week or next.'" (p. 2) Stone writes that "America's leading military commentator, Hanson Baldwin of the New York Times, a trusted confidant of the Pentagon, reported that they [U.S. military documents] showed 'a marked buildup by the North Korean People's Army along the 38th Parallel beginning in the early days of June.'" (p. 4)

How and why did U.S. President Truman so quickly decide by June 27 to commit the U.S. military to battle in South Korea? Stone makes a strong case that there were those in the U.S. government and military who saw a war in Korea and the resulting instability in East Asia as in the U.S. national interest. Stone presents the ideas and actions of them, including John Foster Dulles, General Douglas MacArthur, President Syngman Rhee and Generalissimo Chiang Kai-shek, which appear to amount to a willingness to see the June 25 military action by North Korea as another Pearl Harbor in order to "commit the United States more strongly against Communism in the Far East." (p. 21). Their reasoning may have been, Stone thought, the sooner a war with China and/or Russia the better before both become stronger. President Truman removed Secretary of Defense Louis Johnson, according to Stone's account, because Johnson had been selling this doctrine of preventive war. (p. 93)

Stone shows that Truman committed the U. S. military to the war in Korea, then went to the U.N. for sanctions against North Korea. "It was neither honorable nor wise," Stone argues, "for the U.N. under pressure from an interested great power to condemn a country for aggression without investigation and without hearings its side of the case." (p. 50) But that is what the U. S. insisted should happen using, Stone argues, distorted reports to rush its case.

Then when the war came to a stalemate at the 38th Parallel, Stone makes a strong case that U.S. Army headquarters provoked or created incidents to derail the ceasefire negotiations. When the North Koreans and Chinese had ceded on Nov. 4, 1952 to the three demands of the U.N. side, the U. S. military spread a story that "The Communists had brutally murdered 5,500 American prisoners." The talks were being dragged out, the U.S. military argued, because "The communists don't want to have to answer questions about what happened to their prisoners" and they are lower than "barbarians." (pp. 324-25) At no time after these reports were these "atrocities" reported again or documented. But hope of a ceasefire subsided.

Stone takes the story in time only a little beyond the dismissal of MacArthur on April 11, 1951. He quotes press reports as late as January 1952 that "there still could be American bombing and naval blockade of Red China if Korean talks fail."(1)

The evidence which Stone presents is solid but circumstantial. What else could it be, with the official documents still unavailable? In the 1960s, the Rand Corporation, a major think tank originally funded by the U.S. Air Force, conducted studies with additional information and according to one reviewer came to "almost identical conclusions" as Stone.(2)

Stone's telling of the history of the Korean War, emphasizing the opportunistic response by the forces in the U.S. advocating rollback and also downplaying the role of the Soviet Union challenged the dominant assumption that this was Stalin's war. "Until the release of Western documents in the 1970s, prompted a new wave of literature on the war, his remained a minority view."(3)

Then in the 1990s, documents from the former Soviet archives became available, as did telegrams and other sources from the PRC archives. Scholars examining these documents and fitting the pieces together were able to make the case that Kim Il-sung had sought and eventually received Soviet support for a military effort to unify Korea. Stone had been wrong to suspect that General MacArthur and John Foster Dulles somehow colluded in the start of the Korean War.

But Stone did a service by documenting the role of sectors of U.S. policymakers looking for an opportunity to push the USSR and the PRC back from Northeast Asia. Bruce Cummings studied the detailed policy debate in the U.S. which led to the policy of active containment. Cumings' book, The Origins of the Korean War, Volume II gives substance to the internal fight between supporters of rollback and those who supported containment, which for Stone was journalistic speculation.

In 1952 when it was published, The Hidden History of the Korean War met with almost a complete press blackout and boycott. But that included no rebuttals or answers from official U.S. sources. There was a republication in 1970 and the book has been translated at least into Spanish, Italian, and Japanese. Some chapters also appeared in French. Used copies are still available, especially from online booksellers.

I. F. Stone's case is thought provoking and helpful, especially when tensions are being stirred up again on the Korean Peninsula, and manipulated wars are still in style. Perhaps however journalism like that of Stone's and lessons from the first Korean War are making a second Korean War less likely.

1. Wall Street Journal, Jan. 17, 1952
2. Stephen E. Ambrose, Professor of Maritime History at the Naval College in the Baltimore Sun
3. Kathryn Weathersby, "The Soviet Role in the Korean War: The State of Historical Knowledge," in The Korean War in World History, edited by William Stueck, University Press of Kentucky, 2004, page 63.
4. Bruce Cumings, The Origins of the Korean War, Volume II: The Roaring of the Cataract 1947-1950, Princeton University Press, Princeton, NJ, 1990

This article first appeared in OhmyNews on Feb.14, 2007
Posted by Next Year Country