A major focus of the ongoing work of Tony Benn - perhaps the most iconic figure on the British left - is to communictae with young people about politics (see, for example, his latest book, Letters to My Grandchildren). Shortly before the latest student protests he spoke to Samia Aziz, herself a recent school leaver, about the relationship between youth and politics, both past and present.

How would you compare political engagement by young people today to earlier periods you’ve witnessed, including during your own youth? Are there any important or striking differences? Do you agree, for example, with the common assertion that today’s youth are more apathetic than previous generations?

No, I think young people, whatever period of history they’re from have always been the same. They come towards adulthood and think about the world they know, and decide what to do about it. And some people write poetry, some write music, some get involved in political action, some in trade union action, and out of what they do comes the history of that period. And I think what’s different between previous generations and today is that the present generation now sees everyone in the world, because of the internet and television and everything, as members of the human race. And they’re much less conscious of nationality. They are very concerned about the world because they know that this is the first generation in human history where people have got the capacity to destroy the human race! That’s never been true before, you kill one or two people with a bow and arrow, and a few more with a gun or a bomb, but with nuclear chemicals and biological weapons, you could make the entire human species extinct. So I think young people are very concerned, but if you ask them what they feel, as they have been, they say two things: firstly, nobody listens to us, and secondly, they say they don’t believe what they’re told. And anger and mistrust are not the same as apathy. So I think we should have a lot of confidence in the younger generation.

But do you think present generations are more apathetic than previous generations? 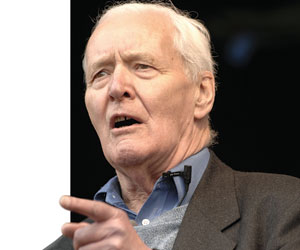 Well, no. At different periods, when things happen, it attracts a lot more attention and involvement. But I don’t think there’s much difference in levels of apathy, really. I remember once a story of a young man who said to an old man, “Why should I take an interest in politics?” and the old man said, “Take an interest in politics, before politics takes an interest in you!” - Before it sends you to war, asks of you to fight in Afghanistan, taxes you, does this or that. And I think that idea, that either we take charge of the world we live in, or the world we live in will take charge of us, is a continuing factor in every generation.

Tell us something about your political involvements as a young person. It would be interesting to hear about when and how you first became politicised, as well the nature of your political activities at school, university and as a young adult.

Well, I was always very involved in politics, ever since I was quite young. I came from a political family, my father was a Labour MP, and I used to go to meetings with him. I also address meetings at school, and wrote about my experiences. When I was approximately 5, I went to a children’s tea party at a house in Smith Square: it was the home of a young dynamic Labour MP: his name was Oswald Mosley. That was before he set up the New Party and subsequently led the British Union of Fascists. I also remember the Spanish Civil War very well. And then in the 1935 election when I was only ten years old, I went round distributing a range of literature. And some of that literature, I’ve still kept - I find it very interesting. The miners were pointing out that in the 9 years before that election, 7,800 miners had been killed and over a million had been injured in the British pits when they were privately owned. At university, I was involved in political meetings of one kind or another. I took part in debates and that kind of thing. So then after the war, I came back and campaigned in all the elections, and got elected very young. And that’s my story.

Are there any important lessons that you think can be drawn from your early political activity for young activists today?

Well not really, I think every generation have to do it their own way. But I think my function is just to encourage young people, because I think encouragement is the most important way to get the best out of them. So, if young people ask me for advice, I try all the time to encourage them to do what they really think they are doing and to give them my full support.

Clemenceau said that ‘Not to be a socialist at twenty is proof of want of heart; to be one at thirty is proof of want of head.’ Do you agree that socialist politics are just a youthful aberration, a hormonal phase that young people pass through on their path to political maturity? And do you agree that there is some affinity between youth and leftist politics?

No, I don’t really believe that. But I do think that young people sometimes do not see how clearly things need to be changed, and old people tend to mock them, and say: ‘oh if you knew what we know, you wouldn’t say such a silly thing’. But I don’t take that view. I think if you are interested in the society you live in and you take a position, you may choose to alter your view later. But it doesn’t really follow that common sense tells you to be a Conservative. I don’t believe that. A left critique often does make more sense to young people, but many older people have seen the truth of the left critique over the course of many years.

But do you think the left ought to try and focus their political action around young people? Should campaigners try specifically to encourage more young people to get involved, in particular, rather than trying to get those who are older involved?

I think young people are best able to campaign with each other. So if there are young people who are involved in a peace campaign, then those are the people who should approach other young people because obviously people will listen to those of similar age and experience. So you want to use the talent you have where it matters most, and young people appealing to young people is a good example.

Whenever we hear about how different groups are affected by political decisions, some of the key groups we tend to hear about are families, business-people, workers, consumers, women, men and people of ethnic minorities. Young people, however, are not one of these key categories. Should they be? Are young people made unfairly invisible in contemporary political discourse? 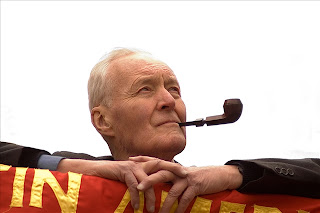 Well, I mean if you want to be visible, you have to do something. If you take all the great works of art, they were done by architects or artists who did them, or musicians or speakers, or campaigners. So if people want to have an influence on society, then they have to do things. If they do them together, then they’re more likely to be successful.

Well, young people are affected in lots of ways. When they’re very young, they’re affected by anything that happens to their parents. If their parents’ pensions are cut, that will affect their living standards; if their parents lose their jobs from the cuts, that will affect them. They also know that benefits of one kind of another are being reduced. Also, the costs of higher education are such that many young people will not be able to go and universities will become market places, and the right to higher education will suffer.

So the cuts will have a very, very profound effect on young people, and I think they’re aware of this, and are going to give a lot of support to the campaigns to resist these cuts – and they already are doing this in universities and trade unions.

Do you think young people are demonised by unfair cultural and media stereotypes? If so, what is the cause of this demonisation? 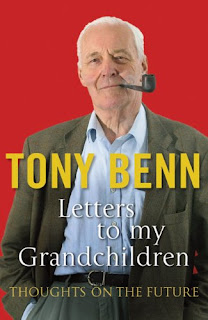 Well I think the reason that young people are attacked is because the newspapers are owned by Conservatives, and they don’t want to see young people coming along and demanding changes that they think would upset their dominance. So they criticise young people. And I think if you take a stand, you get criticised and that is what happens to you. I think people discover that for themselves.

In fact, in general in politics, if you say something sensible or radical, you are going to be attacked by a Conservative. You just have to be used to that. It’s very unpleasant, but I’m afraid that’s the history of the world. And of course in some cases, you can be killed if you say certain things. In Britain we don’t do that anymore. But you do get heavily criticised, and you shouldn’t allow that criticism to discourage you.

Well I think consumerism adjusts your life around what you own and what you buy, and does not bring out the best in people. In a capitalist society, they need to sell things to make money, so they encourage it all. But I think real satisfaction comes from not what you own, but what you do. And I think a lot of young people realise this.

Aside from comments that you’ve made so far, what changes in the condition, role and status of young people in society would you like to see?

Well, I would like young people to have secure education, good jobs and opportunities to develop their own ideas and work with other people. That’s really all I would think is the most satisfying.

Samia Aziz is studying Politics, Psychology and Sociology at Cambridge University.
Posted by Next Year Country