Malcolm Norris was born at Edmonton in 1900. His father, John Norris, was a wealthy Scottish settler. His mother was Euphrosine Plante, a Metis from St. Albert. Children from his father's previous marriage were antagonistic to their Metis step-mother and her children. As a result, the family lived in two separate homes. 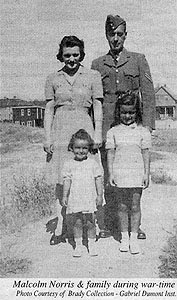 Malcolm grew up and received his education in St. Albert from the Sister of Mercy. He was a good student and fluent in English, French and Cree.

When he was sixteen years old he joined the NWMP for a time. He was later dismissed because he was under age. In 1919, Norris started working for the Hudson Bay Company (HBC) at Fort Vermilion until he grew disenchanted with the trading methods of the company. He left the company and spent his next five years trapping and trading. Norris trapped near Camsell Portage. In 1922, he married Celina Tardiff and they lived trapping, hunting and trading near Fort Fitzgerald. Norris and his family moved from place to place for many years where he witnessed the terrible conditions of Indian and Metis people in many northern communities and the negative impact of the HBC monopoly.

In the twenties he became an avid socialist and began to fight against bigotry and racism. He often introduced himself as "Redskin Norris". Political turmoil in the 1930s caused Malcolm to become a strong activist, lobbying for Metis rights and social equality. He joined with Metis leaders, Jim Brady, Pete Tomkins, Felix Callihou, and Joseph Dion and together they organized the Alberta Metis Association. The meetings financed by taking up a collection from the members, who pitched in what ever they could afford.

Norris was the first vice-president of the first Metis organization called the Association des Metis d'Alberta ed des Territories du Nord-Ouest (Alberta Metis Association). Joseph Francis Dion was president, Felix Callihou, second vice-president, Pete Tomkins and Jim Brady shared the secretarial duties. The group worked as a team and each person brought different strengths to the group. Jim Brady was recognized as the genious in composition and writing but he was very soft spoken in public. Brady was the opposite of Norris who was well known for his passionate and fiery speeches. Felix Callihou had a good command of French and Pete Tomkins had a real command of the Cree language spoken by the Northern Alberta Metis. Joe Dion was a well respected teacher and was strongly involved with the church.

Norris had an incredible command of the English language. It was well known in Metis circles that he wrote one sentence with every word in the Webster's Dictionary; which took him over two and a half years to complete, but he did it!

Malcolm is remembered by people as being a straight from the shoulder kind of man. He was ready to sacrifice and do anything for the common cause and for the good of the Metis people.

In 1934, Malcolm Norris acted as the group's spokesperson at presentations made to the Alberta Government's Ewing Commission, which had the task of investigating the social and economic conditions of the Alberta Metis. He had a sharp tongue and quick wit. In an interview with Murray Dobbin, fellow Metis leader, Adrian Hope tells one of his rememberances of Malcolm at the Ewing Commission hearings in the 1930s. Hope stated that:
"He (Norris) was walking back and forth like as if he was a barrister or a lawyer or something, speaking on behalf of the Metis people. And the judge asked him at that time to condescend down to common everday phraseology, because the brand of English he was using was really way up there among the skyscrapers. He was running around for dictionaries and encyclopedias and everything else to find out some of the meanings of the words that Malcolm was using. So Malcolm excused himself. He says, "I am sorry, your Honour. When I stepped into this courtroom and seen the British flag hanging there, I knew I had to use the English language. My only regret is, your Honour, that I could not express myself in my mother tongue." He says "Maybe I could be able to present my case more clearly." Yeah, I felt real proud to be a Metis that day, due to that fact."

Malcolm was involved in obtaining the rights of the treaty Indians and halfbreeds in Alberta. The chiefs used to call him 'Old Lawyer'. He helped form both the Indian Association of Alberta and the Metis Association of Alberta in the twenties and thirties. He was jailed eleven times for going on Indian reservations. He was a diehard socialist and a tireless organizer.

Norris was eventually rejected by the Alberta provincial government because of his stand in politics. He was also disillusioned with the time it took for the Alberta government to implement the Metis colonies. It took from 1933 to 1939 to get the Metis colonies established and the Metis Betterment Act passed. When World War II broke out, the Metis Association of Alberta disbanded and Norris joined the Royal Canadian Air Force. When both Norris and Brady returned from the war they never settled on the Alberta Metis colonies even though they both were major contributors in the creation of the colonies. Norris was disgruntled with the paternalistic colony operations and intervention of the state in Metis affairs.

After the war, Norris turned his hopes toward the CCF party in Saskatchewan forerunner for the New Democratic Party. Norris had high expectations for this newly elected socialist government. In 1944, he was hired by the CCF to help them understand the situation of the native people in Saskatchewan. He also worked for the mineral department of the province of Saskatchewan. By profession he was a geologist. Jim Brady and Malcolm Norris had formed a strong friendship during the Alberta Metis movement and he was instrumental in bringing Brady into Saskatchewan when the CCF gained power. 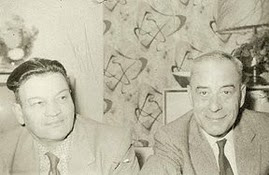 Norris immediately began travelling northern Saskatchewan educating and politicizing the Metis people. He held meetings anywhere he could, such as pool rooms, church halls, and kitchens so that he could educate Metis people about their history and outstanding social and economic issues. He became a strong defender of Metis rights and began to organize another Metis Association in Saskatchewan. He was always reading, writing, on the phone, and writing letters. He visited every Metis community in northern Saskatchewan. Brady and Norris told the people about their common goal to have complete economic independence for the Native people in the North. They wanted Native people to control the natural resources in the north so they would never have to be dependent on government. This position was very different from the lobby effort which they conducted in Alberta. Norris was upset that the Metis had little control over the Alberta Metis colony lands and did not directly benefit from the vast resources the province removed from the colonies. Norris advocated for an independent nation in Saskatchewan with their own land in which he wanted to build a strong north because of the potential revenue the Indian and Metis people could obtain from the future development of northern resources. Malcolm was dead against the Metis organization taking any money from government. 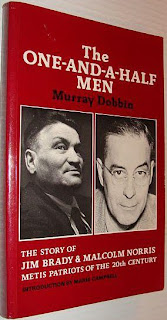 Norris was involved from the late 1940s into the 1960s trying to unify the province's two rival Metis organizations the Metis Association of Saskatchewan which represented largely northern Metis and the Saskatchewan Metis Society based in the south. During this same time period Norris worked with many Indian chiefs and attended meetings to help them politically organize.
With the ousting of the CCF parting in 1964, Norris was dismissed from his job in Prince Albert as the director of the Indian Metis Friendship Centre. Yet, he continued to fight for Metis rights and in 1964, headed the Metis Association of Northern Saskatchewan. In 1966, Norris suffered a stroke, but he continued his political career from a wheelchair. He moved back to Alberta in 1967 where he suffered another stroke and passed away. Norris is remembered as a brilliant orator and political organizer. Fellow Metis organizer, Don Nielson, referred to Norris as a true Indian socialist and a man of great principles. He was committed to the Metis and Indian cause until the day he died. Both Jim Brady and Malcolm Norris died poor people but were both rich in spirit.
Also read Murray Dobbin's The one-and-a-half men: The story of Jim Brady and Malcolm Norris, Metis patriots of the twentieth century
Posted by Next Year Country