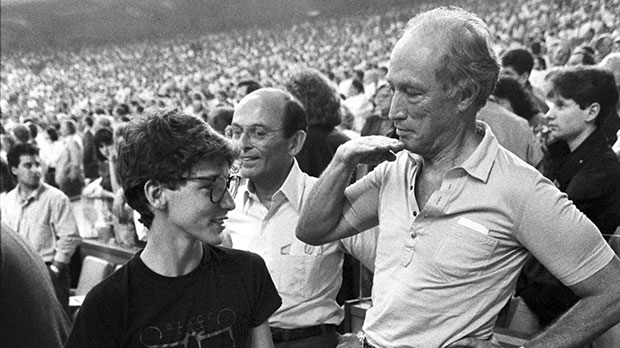 There is no accounting for political judgement when it gets caught up in irrational euphoria. The overwhelming victory of Justin Trudeau in the Liberal Party's leadership race demonstrates just how impoverished the state of our political culture has become.

Did the polls -- almost completely meaningless at this stage of the political process -- so addle people's judgement that they could not see what was in front of them? In a stunning failure of imagination 80 per cent of those casting ballots effectively declared: we think a pretty face and a famous name is all we need to win and more importantly, all the country needs to lead it.

Justin Trudeau is allegedly forty years old but his persona is one of a perpetual adolescent who can't be taken seriously because he doesn't take the world seriously. He's spent his life avoiding anything truly challenging and seems addicted to having a good time -- to the exclusion of disciplined political work. His intellectual capacity, whatever it was, is now so atrophied that it seems clear he rarely engages on his own in serious analysis or thoughtful consideration of important political and philosophical questions.

Trudeau's interview with Peter Mansbridge -- one of the few situations where his advisors weren't holding his hand and telling him what to say -- should terrify all those who voted for him. In one (250 word) answer, to a question on the Boston terror bombing, Trudeau repeated the teenager' sfavourite phrase "you know" eight times and "I mean" four times. This level of political immaturity and inarticulateness is normally expected of people who devote virtually no time to thinking about politics. Here's an excerpt -- Trudeau's answer to the question what would Trudeau do if he were prime minister. Read it and weep.

"First thing, you offer support and sympathy and condolences and, you know, can we send down, you know, EMTs or, I mean, as we contributed after 9/11? I mean, is there any material immediate support we have we can offer? And then at the same time, you know, over the coming days, we have to look at the root causes. Now we don't know now whether it was, you know, terrorism or a single crazy or, you know, a domestic issue or a foreign issue, I mean, all of those questions. But there is no question that this happened because there is someone who feels completely excluded, completely at war with innocents, at war with a society... I mean, yes, we need to make sure that we're promoting security and we're, you know, keeping our borders safe and, you know, monitoring the kinds of, you know, violent subgroups that happen around..."

Violent subgroups that happen around? Who talks like this? It is hard to imagine that Justin's father ever talked like this -- even at age five. This is a man revealed as one who may well be incapable of mature political behaviour let alone good political judgement. Harper smacked him around like a cat playing with a mouse before tiring of the game and finishing it off.

It's not just the content of the response, which is bad enough, but the inability to express coherent thoughts. Trudeau seemed to be mistaking a ruthless mass murderer for a violent kid who grew up in a bad home. His response is so far removed from what the vast majority of people feel about the issue that you have to wonder what, exactly, informs his opinions. The most rudimentary political instincts should have kicked in even if his advisors failed him.

And this wasn't a momentary scrum with a few reporters. This was an interview with Peter Mansbridge -- the most valuable showcase any Canadian political leader can be provided. Liberals know that Stephen Harper will spend millions, if he has to, to define who Trudeau is before Trudeau can. This was Trudeau's big opportunity to define himself as a man of substance, with a vision, and someone who could represent Canada on the world stage.

Apparently we need to go elsewhere for Trudeau's substance and it seems he wants us to accept the theme from his leadership campaign and post-victory musings: that he is dedicated to Canada’s middle class. There is no doubt that the middle class (56 per cent of Canadians identify themselves as such), has suffered -- "hollowed out" -- since the 1980s.

What accounts for this dramatic decline in the class of people who used to define the nation? In a word, globalization, and the public policies which stem from it and helped create it. Amongst those policies are free trade, lowered labour standards, passive acceptance of de-industrialization, the weakening of labour vis a vis capital through cuts to EI and welfare, the virtual abandonment of industrial policies to promote high paying jobs, the use of "temporary" foreign workers, cuts to the "social wage" -- things like post-secondary education, and the transfer of wealth to the uber-rich from the middle class.

All of these policies have been eagerly embraced by the Liberal Party ever since Jean Chretien reneged on his 1993 election promise to revisit NAFTA. Paul Martin’s singular economic policy was trade, he deliberately maintained high unemployment through most of the 1990s to "discipline labour" (including the middle class), cut government revenue by $100 billion over five years, gutted the UI program and abandoned the federal role in the provision of social welfare and effectively put an end to universality as a principle for post-secondary education and any new social programs

In an article in the Globe and Mail, Trudeau does manage to identify some of these trials of the middle class: "While the economy has more than doubled in size in the past 30 years, middle-class incomes have gone up just 13 per cent." But nowhere does he criticize his Liberal predecessors’ policies which created this situation. He commits to a new "national focus" on education yet not funding for it. But it was Paul Martin’s unprecedented spending cuts which precipitated the huge increases in tuition fees and massive student debt.

What Trudeau seems unwilling to admit is that the slow demise of the middle class is the result of corporate globalization and to revive middle class fortunes means a direct challenge of all of globalization’s elements. Will he reverse any of these classic Liberal policies and if so which ones? Will he oppose any further trade deals? Will he try to re-industrialize through a massive renewable energy strategy? Will he revive the federal government’s previous role in funding universities? Will he reverse the gutting of EI? Will he tax wealth?

Don't hold your breath. The real Trudeau is the empty vessel interviewed by Peter Mansbridge and that means the party is in the hands of the same hypocritical apparatchiks who wrote -- and then casually betrayed -- the rosey promises in Jean Chretien's 1993 Red Book. Welcome back to the future.

Murray Dobbin is a guest senior contributing editor for rabble.ca, and has been a journalist, broadcaster, author and social activist for 40 years. He writes rabble's bi-weekly State of the Nation column, which is also found at The Tyee.
Posted by Next Year Country