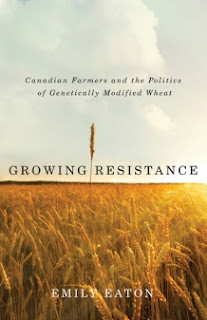 In 2004 Canadian farmers led an international coalition to a major victory for the anti-GM movement by defeating the introduction of Monsanto’s genetically modified wheat.

Canadian farmers’ strong opposition to GM wheat marked a stark contrast to previous producer acceptance of other genetically modified crops. By 2005, for example, GM canola accounted for 78% of all canola grown nationally. So why did farmers stand up for wheat?

In Growing Resistance, Emily Eaton reveals the motivating factors behind farmer opposition to GM wheat. She illustrates wheat’s cultural, historical, and political significance on the Canadian prairies as well as its role in crop rotation, seed saving practices, and the economic livelihoods of prairie farmers.

Through interviews with producers, industry organizations, and biochemical companies, Eaton demonstrates how the inclusion of producer interests was integral to the coalition’s success in voicing concerns about environmental implications, international market opposition to GMOs, and the lack of transparency and democracy in Canadian biotech policy and regulation.

Growing Resistance is a fascinating study of successful coalition building, of the need to balance local and global concerns in activist movements, and of the powerful forces vying for control of food production.

“This is a unique and important work. The preponderance of discussion on GM resistance has focused on consumer/health, environmental and economic issues. This work, by focusing on farmers’ perspectives, is exploring new territory, opening questions, giving insights into a different kind and level of thought and argument in the field.”

Emily Eaton is an assistant professor of geography at the University of Regina specializing in political economy and natural resource economies. She is also active in a variety of social justice struggles.
Posted by Next Year Country