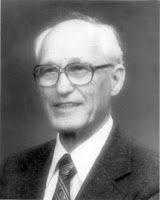 The legacy of Communist parties in the 20th century is one of both honour and infamy and deserves neither emulation nor derision.
William Charles (Bill) Beeching (1913 - 1990), born in Qu'Appelle, was the standard bearer for the Communist Party of Canada in Saskatchewan and was a fixture of left politics here for decades. The website Focus on Socialism chronicles some of the important contributions Beeching made to left politics.

During the 1930's, the Communist Party was one of the few organizations willing and able to fight for workers. They instigated the estabishment of the Worker's Unity League, the Farmer's Unity League, the National Unemployed Workers’ Association  and the Relief Camp Workers' Union, all had political resonance here in Saskatchewan.

Beeching also served honourably with the Mackenzie-Papineau Battalion in the Spanish Civil War.
Posted by Next Year Country