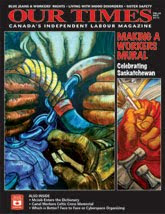 This is the most exciting day of my life," declared 23-year-old artist Crystal Howie last fall at the unveiling of her mural at the Regina Union Centre. Standing before a diverse audience of friends, workers, artists, and dignitaries that included Regina's mayor Pat Fiacco, she had good reason to glow that day in September 2003. As Fiacco said in his speech to the gathered crowd, Howie's mural illustrated perfectly "just how much of themselves people put into their communities." A huge part of our history, said Fiacco, "is the struggle of the workers who built our cities, our province, our country." The mural provided an opportunity "to think about past struggles and today's efforts to build a better world."


Howie's workers' mural was initiated by the Saskatchewan Centennial Workers Celebration Committee. In the summer of 2002, a group of about 45 Regina-based artists, trade unionists, academics and retired activists struck the committee in order to organize projects that would recognize the important roles working people have played in building Saskatchewan. To this end, they decided to sponsor a written history of Saskatchewan labour. As well, they agreed that another effective way of celebrating workers' history, and educating people about that history, would be through the visual arts.

There were two centennial celebrations on Saskatchewan's horizon at the time. Regina - home of the Regina Manifesto, the Regina Riot, and the first CCF (Co-operative Commonwealth Federation) government in Canada - was going to reach 100 years of age in 2003. The province was to be 100 in 2005.

It was local artist and activist Armand Roy who conceived of the idea of creating a mural to celebrate Saskatchewan workers' history, says Bob Ivanochko, the centennial committee's president. "We thought this would be a simpler project than the monument we had initially planned. It would be cheaper, more immediate, and could be tied to the Regina centennial. We expected that this would start making the idea of worker art more concrete for union activists," Ivanochko adds. The centrally-located Regina Union Centre, home to union activities for decades, was an ideal choice for the site. 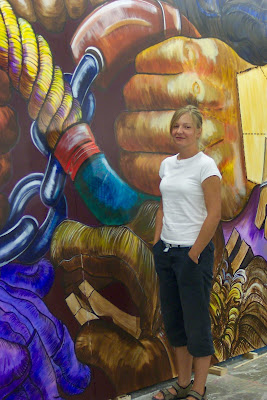 With some start-up funding from the non-profit organization SaskCulture Inc., a selection committee composed of artists and trade unionists was established to solicit proposals for a mural.

The purpose of the mural was to "recognize workers' contributions to the history of Saskatchewan." One of the selection criteria in the call for proposals was how the mural would include "the voices and stories of workers from the last 100 years in Regina." The committee clearly outlined its political goals: "While civic public spaces usually showcase production achievements, the agents and processes of production and the history of labour are usually obliterated from public memory. The mural will serve to anchor in the city, for years to come, a positive image of labour, an image that will illustrate a specific aspect of our history for future generations."

The overall objectives of the project were sixfold: to recognize artists as workers; to educate the community about the history and contributions of workers; to be inclusive of the diversity of voices of workers and representative of their history and personal stories; to reflect the history of the labour movement; and to engage workers and unions in the process of creating public art.

Crystal Howie is as unpretentious as she appears. Wearing jeans and a baseball cap, she is very much a reflection of her community. Howie was born in Indian Head and raised in Churchbridge, Saskatchewan, a small working-class town where many work for the IMC potash mines in nearby Esterhazy.

Howie has strong feelings about her roots. "My home is a very small community of people," she says. "I think of it as very rural. I believe that the work ethics of the people and my community, rubbed off on me. My father - from Esterhazy, and a truck driver for about 25 years now - has shown me how to work hard. He also gave me a sense of humour and the laid-back qualities that many truck drivers possess. I think the work we do dictates, much of the time, our sense of humour and our social behaviour." 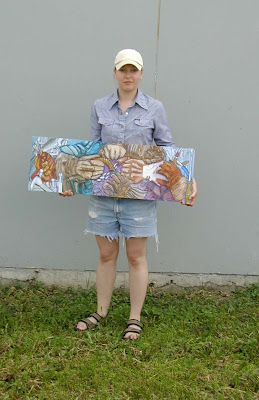 Howie would know, as she worked in the mines for four summers to put herself through school. While she graduated from the University of Regina's visual arts department with a bachelor's degree in fine arts in 2003, it was working in the mines that helped inspire her creativity.

" Working underground gave me a chance to broaden my imagination," she says. "There really is not much underground, at first glance. But after I had spent some time working there, and you could say living there, I began to see the beauty and immensity of my experience. Maybe this experience is universal for miners. I'm not sure. But the idea of where you are and how it changes you forever - the way you look at work, life, surface, and anything that is beneath your feet - is absolutely amazing," says Howie.

When Howie was offered the mural project in the summer of 2003, she had to quit her job at a meat-packing plant. This was maybe just as well, since Saskatchewan's single case of mad cow disease was in the process of devastating the cattle industry on the Prairies. With the assistance of the University of Regina fine arts department, she obtained studio space and materials, and started her 32 ft.-by-10 ft. workers' mural.

The end result, after months of work, was a mural that revolved around the theme of work gloves: their purpose and meaning. "The glove is a symbol of the hand," says Howie, "and shows every line and crease of history that has been placed on it or, rather, worked into it. The hand, like the glove, is a map of a person's history, work history, life lived." The mural includes images of a myriad of tools, from hammers to clothes-pins, and a pattern of Saskatchewan. One gloved fist clenches paintbrushes and a pencil. The gloved hands in the centre of the mural grasps an infinity sign made up of rope, chain, copper piping and hose. The infinity sign symbolizes the never-ending struggle of the labour movement for justice.

Annie Gerin, a founding member of the centennial committee, is an assistant professor of art history at the University of Regina, and one of Howie's former teachers. Her interest in public and political art informs her studies and teachings, and she was ecstatic when she heard Howie's submission had been selected for the mural.

" The labour struggle and matters that concern the workers' movement are mostly absent from current artistic trends," says Gerin. "Throughout the history of modern art, there have been moments when avant-garde art and the labour movement have come together. One of the best examples is Soviet art, made for the workers by artists who considered themselves workers. Soviet art was meant to promote a working-class culture and advance labour ideals. Similar trends have evolved around the world: the Dada movement, the Bauhaus, the work of Mexican muralists and the art of the New Deal in the United States."

Political art is often located in public spaces, according to Gerin. "Very often art concerned with labour issues has sidestepped the gallery system to address directly the working people in the space of the city. In public spaces, murals, monumental sculptures or art interventions can target a broader audience. There, public art that advocates for the labour movement can establish, in the public sphere, positive images of labour and instil a sense of pride in the working people."

The selection of Howie's design was not without controversy, however. Some activists felt that her work placed an emphasis on traditional male symbols, and insufficiently reflected women's work. Jeannie Mah, a local artist and member of the selection committee, disagreed. The strength of Howie's design, she responded, is that "the theme of struggle and revolution is implicit and explicit in the subject matter as well as the painting style . . . . Acknowledging that work is gritty, tough, active, and most importantly, equal, Crystal has embraced the concept of all workers - the work of both men and women. . . . . This intelligently subversive strategy makes strong art; these images are not one-liners, to be easily understood. Rather, they give us layers of meaning and counter-meaning, unfolding and folding in on itself."

As Howie worked on the mural over the summer, the initial concept developed and evolved. While she was nearing completion in September, the committee had to figure how and when to "unveil" this very public work of art.

September 13, a day that had been declared an International Day of Action against the World Trade Organization, was chosen as the date of the mural launch. This was done to affirm the committee's view that work, art and politics must be intertwined. On that day, the WTO was meeting in Cancun, Mexico to further its goals of corporate globalization. The committee believed that making connections between yesterday's and today's struggles for social justice could and should be made through the intermediary of art. Art is not neutral or merely aesthetic; it should be political and contemporary to be of any meaning.

The mural launch was sponsored by a host of labour and progressive organizations: the Saskatchewan Centennial Workers Celebration Committee, the Council of Canadians, the Saskatchewan Federation of Labour, the Canadian Labour Congress (Prairie Region), and the Regina and District Labour Council. Among the speakers were Annie Gerin, Mayor Pat Fiacco, Rick Byrne from the CLC, Howie, and Joanne Crofford, Regina NDP MLA and Minister of Culture, Youth and Recreation. (Crofford's father, Hub Elkin, is a longtime trade unionist from Moose Jaw, a CCF/NDP activist, and a member of the centennial committee.)

Cold wind and rain drove the participants inside, and the "unveiling" took place in the crowded union centre hall. To an overflowing audience, the speakers all addressed the importance of art, labour and social struggle. Any doubts about Howie's colourful mural were overcome by the power emanating from it. On the drab, grey entrance to the Regina Union Centre was a new, vibrant work of labour art commemorating the workers of Regina. 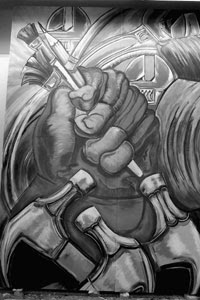 According to Gerin, Howie's mural succeeded in meeting the committee's goal of creating a positive image of labour, and sense of pride for working people. "Crystal chose an interesting strategy to celebrate working people," she said. "Instead of depicting moments of labour history, she elected to represent industrial labour, agrarian labour, intellectual labour, art and craft. In that sense, the mural represents all working people and working activities. It does not simply honour the past; it also celebrates workers' present and future."

As for Crystal Howie, she flew off a few days after the unveiling to study at the Women's University in Kitakyushu, Japan, where she plans to continue her art work in whatever spare time she has. She will be back.

Doug Taylor worked for the Saskatchewan Government and General Employees Union and is author of For Dignity, Equality and Justice: A History of SGEU. To see the mural, drop by the Regina's Union Centre at 2709 12th Avenue, Regina.

Our Times magazine link
Posted by Next Year Country