By Juliana Saxberg and Ryan Meili 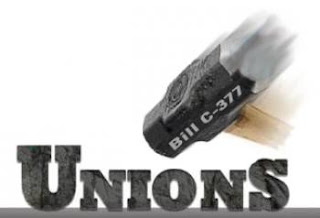 Financial disclosure for labour unions is attracting a lot of attention in both federal and provincial politics. If passed, federal Bill C-377, a Private Member’s Bill that would amend the Income Tax Act, will require unions to publicly disclose detailed confidential financial information or lose the ability to collect union dues from members without tax. Similar legislation could be introduced in Saskatchewan before the end of the year.

These measures are fundamentally not about making unions accountable; they’re about making working people more vulnerable. Not only is this legislation unnecessary, it has the potential to silence workers’ voices, both within and outside the workplace.

Here are three reasons why new financial disclosure legislation is not just unnecessary, but harmful to the democratic principles we hold dear:

First, a host of important measures are already in place to ensure that unions are accountable to their members. Legislation in every Canadian jurisdiction requires unions to provide fair representation to members. Every union must have a constitution which governs member relations, and Canadian courts can and will enforce that constitution. This is consistent with international labour law, which says, “control over the internal acts of a trade union . . . should be exercised by the judicial authorities.” [1]

]Union spending decisions are authorized by leaders elected from the ranks of their members in accordance with the union’s constitution – so in addition to the above checks and balances, members can always exercise discipline over union spending at the ballot box, or by standing for election themselves.

Second, invasive financial disclosure laws will significantly jeopardize our system of collective bargaining. If unions are required to publicly disclose what they are spending on public campaigns or legal actions, employers will know the depth of their war chests and the exact measure of their financial capacity to keep fighting. If employers have detailed information about the union’s ability to sustain a strike or legal action, it will drastically undercut the union’s ability to defend workers. Why would an employer end a strike with a reasonable collective bargaining proposal, if it has knowledge of just how much farther the union’s strike fund can go? Can we trust employers to follow the collective agreement if they know the union’s legal budget is nearly exhausted?

Third, these laws could permit state interference in union activity. As self-governing, worker-led organizations, unions play an important role in the community, supporting and fostering grassroots organization and citizen engagement. In order to be effective advocates for workers, unions must have financial independence – not only from employers, but from government – which means, as the International Labour Organization has held, unions “should not be financed in such a way as to allow the public authorities to enjoy discretionary powers over them.” The proposed legislation will give governments the ability to pull the plug on unions’ social and political activism.

Now more than ever, unions play a significant role in holding governments and corporations accountable. In modern Canadian society, trade unions and labour organizations provide a powerful vehicle for the voices of dissent, which the Supreme Court of Canada has said is essential to a healthy democracy. Undermining unions’ autonomy does not just disempower workers and undermine collective bargaining, it undermines our entire system of democracy.

Juliana Saxberg is a labour lawyer based in Regina; Ryan Meili is a Saskatoon-based family doctor currently running for the leadership of the Saskatchewan NDP.