Why Lake Winnipeg's Degradation is a Prairie-Wide Environmental Calamity 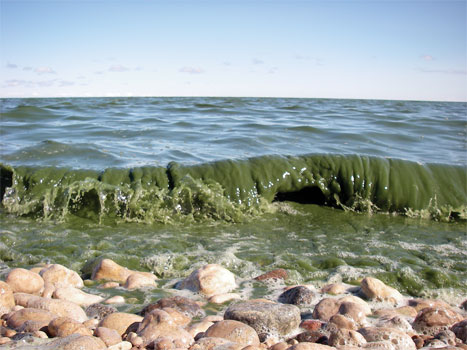 Industrial-agricultural contaminants and Regina’s poorly treated sewage are degrading the Qu’Appelle Valley lake chain. This is a microcosm of a much larger and more devastating trend on the prairies. Waterways in southern Saskatchewan are part of the huge Lake Winnipeg drainage basin which covers one million square miles stretching across the three Prairie Provinces, part of Ontario and four US states. What’s happening downstream from Regina’s sewage, in the Qu’Appelle lakes, is happening on a more massive scale further downstream, as more pollutants from the vast Great Plains Basin go into Lake Winnipeg.

Lake Winnipeg is the 10th largest freshwater lake on earth; it’s now better known as the most chlorophyll-polluted lake on the planet. Massive algae blooms, covering up to 15,000 square km, now “strangle” Lake Winnipeg. These have increased by up to 500% since 1900. The eutrophication degrades aquatic biodiversity and creates deadly blue-green algae (cyanobacteria) which has increased a thousand-fold just since the 1990s. Canada is not just getting a bad environmental reputation for the tarsands; Lake Winnipeg is among the most ecologically-compromised of the world’s great freshwater lakes.

This resulted from fast, vast transformations in prairie land uses. Granted, this is most extreme in Alberta, the upper headwaters of the Lake Winnipeg basin, where we see “productivity” threatening the carrying capacity of the land. According to Robert Sanford, writing about “An Unexpected Water Crisis” in the Sept 2012 Literary Review of Canada, yearly, Alberta produces 2 million head of cattle, 3 million swine and 120 million kg of poultry. Add to this 35 million tonnes of crops and 25 million cubic metres of timber. Then there are 160 million cubic metres of natural gas, 80 million of bitumen and 35 million of conventional oil, and 35 million tonnes of coal. Alberta also produces up to 1,500 petajoules of electricity annually.

All of this production exploits and degrades water. What Harper’s government presents as the model for Canadian “jobs and growth” is actually a recipe for the quick ecological and social decline of the West. And such agricultural, industrial and urban contamination is expanding throughout the Lake Winnipeg drainage basin, including within Saskatchewan, the “new Alberta”, as the Sask Party opens up the province for toxic resource extraction. At least Alberta’s big cities have upgraded their sewage treatment. Regina has not!

The US’s National Academy of Science has chronicled how “land-cover changes” such as deforestation, wetland destruction, urban expansion and engineering of the landscape through irrigation and water diversion are increasing the intensity of flooding and droughts. Such unsustainable processes are advancing on the prairies, where up to 90% of the wetlands in the Lake Winnipeg basin have been drained. Netley Marsh, which used to cover 75 square km, is increasingly flooded, though Manitoba Hydro denies that this is deliberately done to keep water high to generate electricity. Wetlands act as sinks for nutrients like nitrogen and naturally purify run-off water; they provide a priceless ecological function (“service”) that is given little or no value in the uncaring quest for short-term economic growth.

You can’t continue abusing the land, atmosphere and oceans without ecological blowback. Thankfully recent polling shows that only 2 % of Canadians are now all-out climate change deniers. Some of them must be in the provincial and federal cabinets, for their decision-making regarding water (or energy) doesn’t incorporate climate science. This knowledge needs to sink in quickly. From 1948-2007 the mean temperature in Canada increased by 1.3 degrees C. The country is wetter than in the 1950s and heavy rainfalls occur much more frequently. The intensity and damage from more frequent and intense thunderstorms, such as we saw over this last summer, are getting more like coastal hurricanes. The Arctic melt is occurring faster than in previous “worst case” scenarios. And, are we ready for more intense droughts and forest and grass fires?

Three-quarters of natural disasters involve the cycles of evaporation, condensation and precipitation that perpetually occur on this ocean-covered planet. We are already facing increased uncertainty about the predictability of how these hydrological systems affect the prairies. Forecasts about Lake Diefenbaker and the water volume in the Qu’Appelle and Saskatchewan Rivers did not prove very predictive before the 2001 floods. This flooding flushed an unprecedented amount of contaminants and algae nutrients into the Lake Winnipeg basin; urban and cottage sewage, excrement from livestock and wildlife and massive agricultural chemicals went into the drainage system. If we want our grandchildren to swim in these lakes we’d better get our collective act together, and soon!

Hydrological instability now stares us in the face. This is primarily because the capacity of the atmosphere to hold water goes up with rising temperatures, which mostly come with increasing carbon pollution of the atmosphere from the fossil-fuel based corporate economy. There is about a 7% increase in water-holding capacity with each one C degree increase. Global warming will bring rains of longer duration and greater intensity, a pattern we already see here as elsewhere.

Climate scientists now talk of “atmospheric rivers”; massive currents of water contained by warming air that can dwarf continental river systems lying below. When these overflow their “cloud banks” they flood river banks on the magnitude we saw in Pakistan and Australia in 2010. Such unprecedented flooding continues on, somewhere, on this stressed planet.

Certainly we waste and over-consume water in comparison to other countries, other than the US. Many people elsewhere consume only the water daily that we use in one toilet flushing. But our emerging water crisis comes from something more systemic. The widespread view that we have unlimited water for our relatively low population is purely deceptive; Canada is already exploiting most surface waters and is mindlessly exploiting groundwater without adequate knowledge or concern for future generations. Lake Winnipeg is a huge “wake up call”. Who is listening?

Facing these new economically-rooted realities and challenges is what sustainability is all about. We must preserve and restore natural systems that provide priceless eco-system “services”. Achieving more hydrological predictability depends on it. This means halting wetland drainage, no matter how small, and shifting to more ecologically-resilient and protective agriculture. It means quickly shifting to renewable energy that doesn’t further degrade the landscape and contaminate waterways and the atmosphere. It means restoring lakes, large and small, from Lake Winnipeg to Saskatchewan’s Pasqua Lake, that are “being strangled” by industrial and urban pollutants.

There are success stories. Lake Constance, straddling three European countries, has been restored over 30 years at a cost of $2 billion. This primarily required reducing agricultural run-off and improving standards and practices for urban waste water treatment. Does this sound familiar? It should, for it’s what is so urgently needed in southern Saskatchewan, if the Qu’Appelle Valley waterways are to be restored. Just how can the province justify an $80 million grant to Regina for a new stadium while providing nothing for the city to upgrade its sewage treatment?

Restoring the ecological health of Lake Winnipeg will be a much larger national challenge, for it is 45 times bigger than Lake Constance, but we must get on with it. Harper’s hostility towards science and his environmental cuts and deregulation won’t help!

We are slowly learning how past economic systems degraded regional natural systems which in turn brought devastation to social and cultural systems. For the first time in human evolution this process is occurring on a global scale. When we look at how we use and treat water on the prairies, and what has happened to Lake Winnipeg, we see that regardless of the party in power, “business as usual” is neither viable nor acceptable.

Note: You may wish to view “Save My Lake” online at CBC’s “The Nature of Things”.
Posted by Next Year Country