By Stuart A. Thiesson
Encyclopedia of Saskatchewan

Agricultural settlement was well advanced before the formal creation of the province of Saskatchewan in 1905. Wheat was king: this reality had not escaped the attention of the open- market trade members of the Winnipeg Grain Exchange, who, in collaboration with the Canadian Pacific Railway (CPR), were unchallenged in actively exploiting export grain buying opportunities. Farmer grievances began to build over complaints of unfair grading practices, excessive dockage, short weights, and unreasonable and monopolistic pricing and shipping practices.

Farmer anger had been building when W.R. Motherwell and Peter Dayman called a general meeting in Indian Head for December 18, 1901. It was unanimously resolved that united action was needed; and after drafting a constitution and by-laws, the Territorial Grain Growers Association (TGGA) was organized. Following a rapid expansion in membership, the first convention of the TGGA was held on February 12, 1902, where Motherwell was elected president and John Miller secretary. The fledgling organization soon had its first court challenge against the CPR agent in Sintaluta, who had refused to honour a “Car Order Book” provision under the Manitoba Grain Act, whereby a farmer might independently obtain a grain car, and load and ship his grain to market. The organization won the case, which was then appealed to the Supreme Court by the CPR; the Supreme Court upheld the lower court’s decision, establishing for all time the farmers’ right to the use of the Car Order Book. The Sintaluta trial represented the first major victory for the organized movement.

At the fourth annual convention of the TGGA held in Regina in 1904, Edward A. Partridge of Sintaluta was delegated to go to Winnipeg to learn about the grading of grain cars and about grain marketing in general. In January 1905, he reported his findings to a mass meeting of farmers and outlined a plan to form a joint stock company to be known as the Grain Growers’ Grain Company (GGGC). After strong opposition from members of the Winnipeg Grain Exchange and against legal challenges, the GGGC was accorded on the Exchange a seat that permitted it to trade. When Saskatchewan became a province in 1905, the TGGA was renamed the Saskatchewan Grain Growers Association (SGGA). W.R. Motherwell became the province’s first Minister of Agriculture in the government of Premier T. Walter Scott. 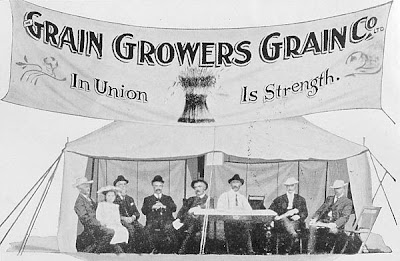 The concept of orderly marketing of grain was, as early as 1907, being advanced by Partridge. Congestion and a shortage of grain storage were major problems. Prairie farmers had petitioned provincial governments to take over the country elevators, and the federal government to take over the terminals. Partridge promoted the idea that the whole trade be brought under the management of one agency, and suggested an independent commission be nominated by the SGGA and appointed by government. The Saskatchewan government appointed a three-man Commission of Enquiry in February 1910; two of its members were SGGA executive members. It recommended that the government support a co-operative elevator system, which it did by guaranteeing bank loans so that farmers could construct an elevator. The Saskatchewan Co-operative Elevator Company Ltd. resulted in 1911. Although the SGGA executive was appointed as its provisional directorate, it never operated as a true co-operative. In 1913–14, the federal government storage elevators were constructed in Calgary, Saskatoon, and Moose Jaw as a direct result of farmer agitation.

The February 1913 Annual Convention of the SGGA was highlighted by the formation of the Women’s Section of the SGGA, which broadened the organization to a farm family movement. It was active in the promotion of social and educational, as well as economic issues; Annie Hollis was its first president. Violet McNaughton, who served as secretary of the Women’s Section and later as its president, campaigned for the establishment of municipal hospitals and was active in the Women’s War Conference in 1918 and in the Progressive Party in 1921. The GGG had assisted the Alberta government in the establishment of the Alberta Co-operative Elevator Company. Wartime demand for export wheat accelerated greatly, and a move was made to amalgamate the three farmer-owned companies. The GGG and the Alberta Co-operative Elevator Company did so in 1917 to form the United Grain Growers Ltd.; however, the Saskatchewan Co-operative Elevator Company declined to participate.

The SGGA established a Trading Department in 1914, enabling its farmer members to co-operatively purchase in bulk such items as coal, lumber, binder twine, and farm fuels at wholesale prices. In 1929, it amalgamated with the Saskatchewan Co-op Wholesale Society (a forerunner of present day Federated Co-operatives Limited). World War I had brought about major disruption in world grain trade and commerce. The federal government undertook direct intervention in the marketing of wheat in 1917 by appointing a Board of Grain Supervisors, which set fixed wheat prices for the succeeding two crop years, 1917–18 and 1918–19. It appointed a Canadian Wheat Board to market the crop of 1919, but restored open marketing for the 1920 crop year; this caused a great outcry within the farm community, as the Canadian Wheat Board had given producers the highest wheat price they had seen to date, as well as pooling. Discussions on forming a producer co-operative marketing pool for wheat began to emerge, but sentiment among many SGGA members for a 100% compulsory wheat pool remained strong. 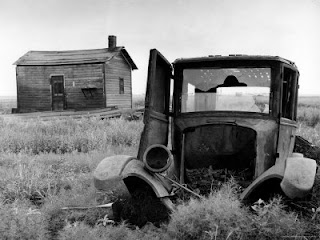 On December 17, 1920, a new, more radical farm group was established at Ituna, Saskatchewan, with Joseph Thompson as president and N.H. Schwarz as secretary. On July 1, 1921, the Ituna group joined with like-minded farmers in Kelvington under the leadership of L.P. McNamee, resulting in the formation of the Farmers Union of Canada (FUC). Many farmers favoured the compulsory pooling concept promoted by the FUC, which launched a drive to sign up farmers for a five-year compulsory pooling contract. The rivalry between the FUC and the SGGA became increasingly divisive.

In April 1923, FUC secretary N.H. Schwarz wrote a letter of invitation to Aaron Sapiro, a California lawyer and expert in co-operative marketing, to come to western Canada to discuss the marketing issue. Sapiro agreed to attend a joint conference in Saskatoon of all stakeholders on August 6, 1923, which was followed by a large public meeting the following day. Sapiro strongly emphasized the need for unity between the organizations if a pooling effort was to succeed. Further mass meetings followed in Regina, Moose Jaw and Swift Current. Sapiro’s presence triggered the formation of a joint Provisional Wheat Pool Committee of the FUC and SGGA to conduct a province-wide campaign to gain contract signers. As a result of a successful sign-up program, the Saskatchewan Co-operative Wheat Producers was incorporated in August 1923. By April 1924, more than 6.2 million contract acres had been signed up, thereby enabling the Saskatchewan Co-operative Wheat Producers Ltd. (later to become the Saskatchewan Wheat Pool, or SWP) to enter into export marketing. On August 2, 1926, the Pool acquired the grain elevators of the Saskatchewan Co-operative Elevator Company. 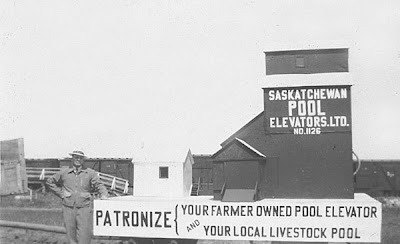 Sapiro continued his efforts to unify the SGGA and the FUC. On July 15, 1926, a joint convention was held in Saskatoon. With Sapiro’s presence and urging, agreement was attained: the historic amalgamation resulted in the formation of the United Farmers of Canada (Saskatchewan Section), or UFC (SS); J.A. Stoneman was elected its first president. The UFC (SS) resumed in 1927 the campaign to gain a 100% compulsory Pool by legislation. They were strongly opposed by Saskatchewan Wheat Pool president A.J. McPhail, who considered that co-operation and compulsion were incompatible. This disagreement created a rift between the UFC (SS) and SWP at the official level, although UFC members continued to deliver their grain to the Pool. The economic crash of 1929 seriously disrupted the Pool’s marketing efforts. An initial price of $1 per bushel had been advanced to farmers, when wheat fell to 50¢ a bushel on the Winnipeg open market: an overpayment on the 1929 crop of $13,752,000 resulted. The province, with a federal loan guarantee, covered the shortfall; but this meant the end of pooling.

The shattering of hope for a compulsory producer Pool caused the UFC (SS) to consider taking political action. In 1931, it amended its constitution to remove the non-political clause and participate in the launching of the Saskatchewan Farmer Labour Group (SFLG). The UFC (SS) actively promoted the new political movement. In 1932 the SFLG emerged as part of the Co-operative Commonwealth Federation (CCF) under the leadership of Reverend T.C. Douglas. At its 1935 annual convention, the UFC (SS) restored the “non-partisan in politics” section to its constitution. By this time it had become increasingly impoverished, and the Great Depression had the farm community in its grip. The UFC’s policy differences with the Wheat Pool, and the divisive foray into partisan politics, left it with a depleted treasury and struggling to maintain membership. It continued to call upon governments for parity prices and compulsory single-desk central marketing of grain. Depressed market prices and large world wheat carryovers eventually resulted in the passage of the Canada Wheat Board Act, 1935, which restored orderly marketing and the fixing of minimum government-guaranteed initial prices.

The UFC (SS) continued to struggle for economic survival during the mid-1930s and throughout World War II. In 1945 its president, Frank Appleby, and his executive met with the executives of the labour and teacher organizations to form the Saskatchewan Occupational Group Council, which was to serve as a liaison and educational group between the three organizations. The UFC (SS) met with officials of the Alberta Farmers Union in 1945 to discuss the feasibility of a farm strike if grievances on farm prices and marketing problems could not be solved. The Interprovincial Farm Union Council was created. A ten-point joint submission was drafted and presented to the federal cabinet in Ottawa on August 26, 1946. It included calls for the establishment of parity prices for farm products, tax reform, and revision of freight rate policy. With less than satisfactory response from the federal Cabinet, the first farm strike was called to commence at midnight on September 6, 1946. It was scheduled to run for thirty days. The strike action was both unifying and divisive within the farm community and the business community. After twenty-one days, federal Agriculture Minister J.G. Gardiner invited the farm leaders to return to Ottawa for further discussions. Certain concessions were gained, such as $1 acreage payments; a floor price for hogs; removal of a three-cent-per-gallon wartime tax on farm fuel; and removal of an 87.5¢ domestic wheat subsidy to flour millers.

Synonymous with the UFC (SS) during most of its history had been the name of Frank Eliason, who became its secretary in 1929 and laboured for twenty years throughout the difficult years of the Depression and its accompanying poverty, farm debt, and loss of land. It was widely expected that the November 1949 convention of the UFC (SS) would be its last; but after long soul-searching and discussion, it was agreed that the movement must stay alive. The name of the organization was changed to Saskatchewan Farmers Union, and Joseph L. Phelps was elected as its first president.
Posted by Next Year Country